Panoramas were a global phenomenon during the 19th century. As the forerunners of photography and film, travelling panoramas were used to convey news. They helped visitors find out what was happening elsewhere. At one point, there were around 300 panoramas in existence. The large paintings travelled from city to city and attracted many visitors.

The Panorama of Scheveningen is the result of the Belgian panorama craze that erupted around 1875. Some entrepreneurs in Brussels wanted to get a piece of the pie and asked Hendrik Willem Mesdag to paint a 'Maritime Panorama of the Hague', probably on the advice of Mesdag's art dealer in Brussels.

In the years that followed, and despite the panorama’s favourable reviews and royal interest straight after its completion, the panorama failed to achieve the commercial success that had been predicted by the Belgian investors.

After four years, the panorama was on the brink of bankruptcy. The artist was so upset by this that he bought his own masterpiece in 1886. This is how Panorama Mesdag remained a permanent attraction on Zeestraat in The Hague. 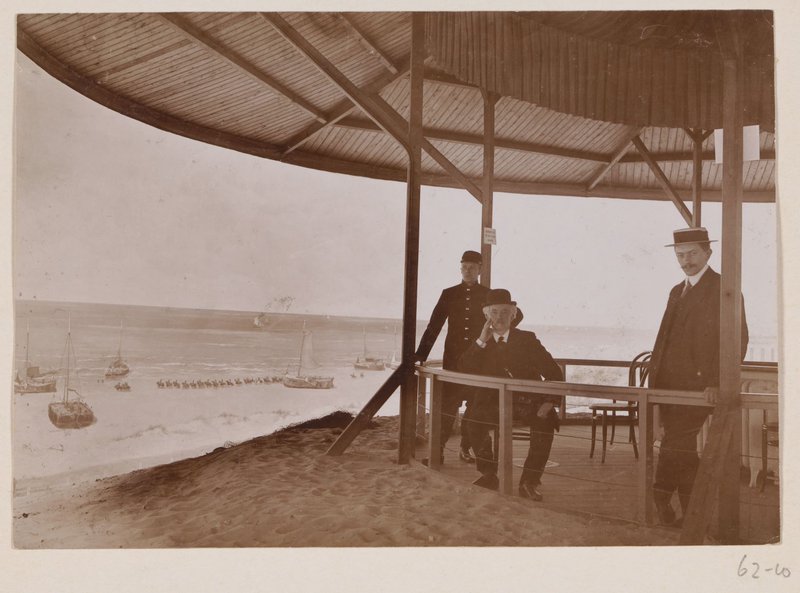 The panorama at the end of the Nineteenth Century.

But although the panorama’s competitor on Bezuidenhout went bankrupt in 1887, things still did not pick up. In order to attract more visitors to Zeestraat, Mesdag brought the 'Panorama of Cairo and the Banks of the Nile', which had previously been exhibited in Vienna and Munich, to The Hague. He rented out his 'own' canvas – which by now was justifiably his – first of all to the Panorama Society in Munich (1887) and then to Amsterdam (1889/91).

Panorama canvases continued to hang in the beautiful Panorama building in Amsterdam, halfway down Plantage Middenlaan and opposite Artis Zoo, until 1926. The last one was 'The Entry of Christ into Jerusalem'. The building was demolished in 1935, going down without a trace.

The rise of film

By 1900, the popularity of panoramas was rapidly declining: static paintings were no match for dynamic films. Many panorama buildings were either demolished or repurposed, and the large paintings were ripped to shreds. Fortunately, the Scheveningen Panorama has been preserved. It is the oldest panorama that can still be visited at its original location.

The Panorama of Scheveningen has long been one of The Hague's most popular attractions.

In an attempt to breathe new life into his panorama, Hendrik Willem had the garden between the front porch on Zeestraat and the Rotunda building converted into exhibition halls in 1910-1911. There, he exhibited his and his wife Sientje’s works. Sientje died in 1909. However, his efforts to draw in visitors were of little use. Even with this gallery, the large canvas attracted little interest.

In 1910, a year after his wife’s death, Mesdag founded a family business in order to secure the future of the Panorama of Scheveningen.

Vision for the future

The couple’s 33 nephews and nieces were all granted a share in the company, thereby accepting a serious collective responsibility: to ensure the operation and preservation of Panorama Mesdag. Hendrik Willem covered the operational losses himself until his death in 1915.

From 1918 to 1934, the heirs were fortunate enough to rent the entire complex to the municipality, which housed the new Modern Art department of The Hague's Gemeentemuseum. Once the municipality drastically reduced the price of admission tickets for cultural policy reasons, things finally started to pick up. The wooden support structure in the dunes even had to be reinforced in order to accommodate the large numbers of visitors.

After 1934, the family business managed to stay afloat by renting out part of the Panorama Hall for temporary exhibitions and selling the occasional painting to cover major maintenance costs. After World War Two, the number of visitors rose to between 150,000 and 200,000 per year.

To this day, the descendants of Hendrik Willem and Sientje continue to facilitate the panorama’s operation and preservation. The panorama and the building itself have since undergone major renovation work. As a result, Museum Panorama Mesdag remains a private initiative to this day. For 140 years, it has offered visitors a magical experience of space in the olden days: a unique cultural and historical heritage for young and old. 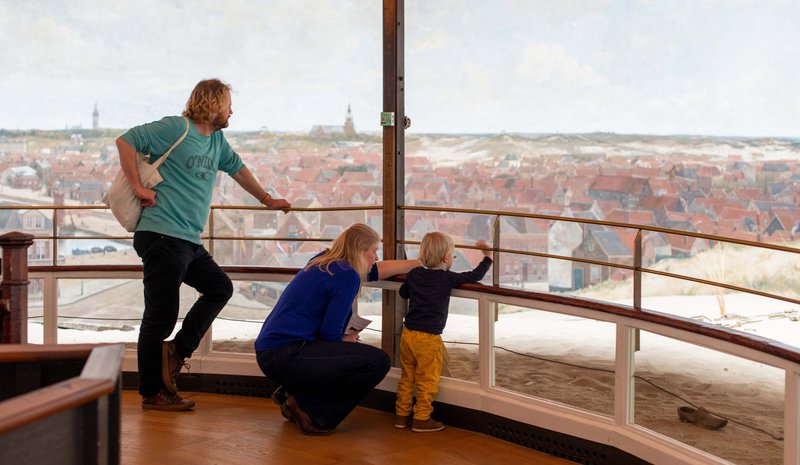 A family at the Panorama of Scheveningen.

Marvel at the panorama in detail

Discover the entire panorama digitally: zoom in, check out the details and see the brushstrokes!

These non-anonymous cookies allow us to collect data about you, so we can measure the usage of the website and improve it accordingly.

When you disable categories, some functionality in the website might not work correctly. It's possible to change your preferences at any time. More information